At 12:59 on Saturday, 4/21/18, RVFD was alerted along with Greensboro VFD (600) and Caroline DES, for a MVC with rollover with possible entrapment on Sparks Rd near Mason Branch Rd. Chief Kellner (415) arrived POV and confirmed a two vehicle MVC involving a roll off type truck which was off the roadway on its side. Further investigation revealed two occupants of the truck were attempting to self extricate. Squad 405 arrived as the patients were extricating themselves. Crew of Squad 405 found a moderate diesel fuel leak and began to contain the leak. Amb.492 arrived was assisting the patients from the truck and assessing their injuries. Chief Kellner established Sparks Rd. Command and requested the Hazardous Materials Unit from Kent Island VFD to assist pumping off the diesel fuel in the saddle tanks. Both patients from the truck were transported with minor injuries. No one was injured in the other vehicle involved. After a successful pump off of the diesel fuel, command was terminated and units went back into service. 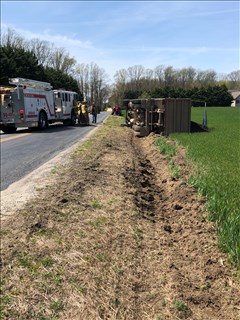 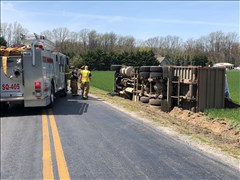 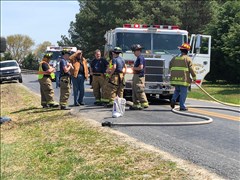